Chessmaster The Art of Learning (PSP) 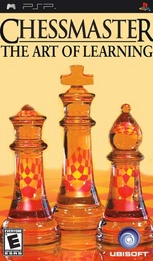 ChessmasterÂ®: The Art of Learning expands the scope of chess to include broader principles of learning. Josh Waitzkin's much-anticipated book The Art of Learning (Free Press) is designed to pave the road to successful long-term growth on and off the chessboard. The eight-time National Chess Champion and two-time martial arts World Champion puts users in his shoes in some of the most riveting and formative moments of his chess career, including the legendary climactic game from the book and film Searching for Bobby Fischer. Waitzkin then turns to the classics, introducing beginners to brilliant games from some of the most important players in the history of chess. In his most revealing commentary ever, Waitzkin not only teaches the beginning chess player the fundamentals of the game, but also humanizes the road to mastery. Never has chess been so exciting.

Guidance from champion Josh Waitzkin: Using the basics from his book, Josh puts players in his shoes during some of the most riveting moments of his career, walks them through the classics, and introduces beginners to the fundamentals of the game, all the while providing revealing commentary about the road to mastery.