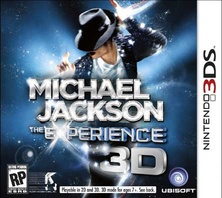 For the first time in a video game, experience the excitement and the magic of Michael Jackson's music videos in 3D. Michael Jackson The Experience for the Nintendo 3DS invites players on a spectacular interactive journey through 15 of the King of Popâs most legendary short films. Built from the ground up for the Nintendo 3DS, and true to Michel Jacksonâs ground breaking and visionary work, Michael Jackson The Experience introduces a brand new way of playing rhythm games, an experience as close as it gets to "dancing" on a portable console.

Experience a more organic and natural way to play rhythm games - With the Nintendo 3DS stylus, draw series of shapes on the touch screen, according to the beat and the choreographies of the Michael Jackson avatar on the screen. Rediscover environments from 15 of Michael Jackson?s classic music videos in stereoscopic 3D - Perform legendary choreographies in faithfully recreated signature settings including the ghoul-infested graveyard from Thriller and many more. Dance your way to glory - Pull off flawless performances and beat multiple varied challenge as you climb ranks up to ultimately become a Legend. Have fun whether you are a very casual player, or a seasoned music game veteran - Three difficulty levels make the game accessible and enjoyable to everyone, with the hardest difficulty setting being truly addictive and challenging to master.