Jimmie Johnson: Anything with an Engine (360) 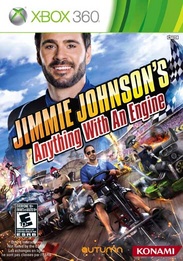 Jimmie Johnson's Anything with an Engine is a racing game designed by the greatest NASCAR star of our generation. A no-holds-barred, combat-racing extravaganza, it is rooted in the experience of Jimmie Johnson's childhood, growing up putting engines on barstools and other household items, then racing them against friends. In time, this became a life philosophy for Jimmie - "I'll race anything with an engine." Now fans of all ages will be put behind the wheel of these...ah, shall we say, "custom vehicles," in the most original racing game in years. Lead-footed bathers, dumpster divers, lawn-mowers, bargain shoppers, sadistic caddies and many more will have the chance to scrap their way toward glory, as players engage in elimination-style circuits across uniquely stylized tracks strewn with themed hazards, traps and awesome jumps in a humor-packed race to the finish line. If rubbing is racing, then what do you call getting hit in the face with a bag of trash as you're passed by a dumpster doing 120 miles an hour? We call it Jimmie Johnson's Anything with an Engine.

Multiplayer, Any Way You Like It: Jimmie Johnson's Anything with an Engine supports up to eight-player online multiplayer action, including ranked and private races, and up to four players in split-screen multiplayer as they battle for first place across the couch, around the globe or both simultaneously! Outlandish Vehicles: As players win cups in the Career Mode, they will unlock additional wild vehicles built in Jimmie's Workshop from unusual items such as shopping carts, recliners and cement mixers. Rock Em, Sock Em Action: Each vehicle features its own unique set of weapon mods comprised of powerful pneumatic side-rams, front firing missiles and rear-deploying mines, allowing players to knock out the competition by whatever means necessary. Over-the-Top Personas: As they progress, players will assume a wide variety of outlandish personas, such as Hazzard Mower, who uses his souped-up lawnmower to cut down the competition and Megaton, a former military officer who barrels around the track on a high-speed bomb. Huge Variety of Challenges: Players will drift and battle their way through six different game modes, including the one-on-one Duel mode and the intense head-on Matador mode, across ten distinct tracks elaborately staged as ruined cities, medieval lands or prohibition-era backwoods, each filled with tricky obstacles and triggered traps.