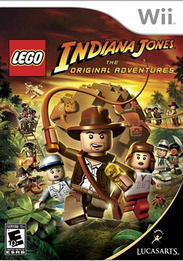 Of course, pop cultures most iconic archaeologist will whip through all the classic moments with the help of a host of supporting characters including Marion Ravenwood and Short Round. Players can also mix and match the body parts of more than 60 playable characters to create new heroes just as they could in the best-selling LEGO Star Wars games.

Everyones favorite fedora wearing hero returns to theaters this May in Indiana Jones and the Kingdom of the Crystal Skull and families can celebrate the humor and excitement of the original films with LEGO Indiana Jones. Tongue-in-cheek humor presents The Original Adventures in a manner only LEGO can whip up, with comical reinterpretations of classic Indiana Jones scenes and elements. Use Indys signature whip as a multi-purpose tool to attack, disarm, swing across gaps, activate levers and interact with a world of LEGO objects and puzzles. For the first time, LEGO Indy characters are fully immersed in their environment; swim, climb, shimmy across rock ledges and pick up and carry objects. Use a variety of weapons from the environment to fight enemies (e.g., chairs, guns, swords, bottles). Unlock more than 60 playable characters, including villains and supporting characters (Marion Ravenwood, Short Round, Rene Belloq, Willie Scott, Marcus Brody, Jones Senior and Mola Ram). Character specific abilities include excavation by Satipo, an umbrella slide by Marcus Brody, and monkey access by Marion Ravenwood. Create unique playable characters like Sallah Scott or Mola Round by mixing and matching the LEGO body parts of all playable characters. Explore the globe and solve puzzles that encourage creative thinking through the use of teamwork and unique building situations only possible in a LEGO world. Cooperative gameplay encourages parents to share the legacy of Indiana Jones with their children in a fun and humorous way.