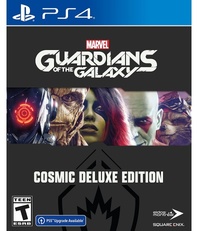 Fire up a wild ride across the cosmos with a fresh take on Marvels Guardians of the Galaxy. In this third-person action-adventure game, you are Star-Lord, and thanks to your bold yet questionable leadership, you have persuaded an oddball crew of unlikely heroes to join you. Some jerk (surely not you) has set off a chain of catastrophic events, and only you can hold the unpredictable Guardians together long enough to fight off total interplanetary meltdown. Use Element Blasters, tag-team beat downs, jet boot-powered dropkicks, nothings off-limits. If you think its all going to plan, youre in for a world of surprises, with the consequences of your actions guaranteed to keep the Guardians on their toes. In this original Marvels Guardians of the Galaxy story, youll cross paths with powerful new beings and unique takes on iconic characters, all caught in a struggle for the galaxys fate. Its time to show the universe what youre made of. You got this. Probably.

Get the Cosmic Deluxe Edition for Marvel's Guardians of the Galaxy and obtain early unlocks of two Star-Lord outfits to customize your character, a SteelBook case, a hardback 48-page artbook and a digital download for a selection of music tracks from the game.

- Marvel's Guardians of the Galaxy

- Marvel's Guardians of the Galaxy: The Art of the Game Mini Artbook (Hardback)