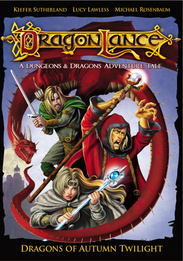 After 300 hundred years of peace, the world of Krynn has descended into darkness as the evil goddess Takhisis and her army of dragons threaten to dominate the lands. Can a small band of heroes, including the wizard Raistlin (Kiefer Sutherland), the priestess Goldmoon (Lucy Lawless), and the half-elven warrior Tanis (Michael Rosenbaum), save the world before all is lost? Based on the New York Times best-selling novel, DRAGONLANCE: DRAGONS OF AUTUMN TWILIGHT is an epic tale of might, magic, and monsters!