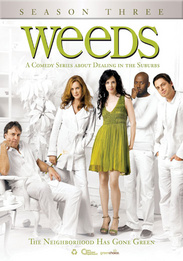 America's favorite pot-dealing soccer mom is more addictive than ever in the third season of WEEDS, the highly acclaimed Showtime(r) Original Series. Emmy (r) and Golden Globe(r) winner MARY-LOUISE PARKER stars as Nancy Botwin, a single mom who resorts to dealing pot after her husband dies suddenly. But when an off beat way to make ends meet grows into a mini-empire, the mother of all dealers finds she may be in over her head - and on the verge of taking everyone else with her. Hilarious and subversive, WEEDS is the hit that put the herb in suburb.