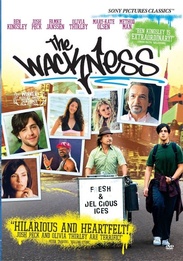 It's the summer of 1994, and the streets of New York are pulsing with hip-hop. Set against this backdrop, a lonely teenager named Luke Shapiro spends his last summer before university selling marijuana throughout New York City, trading it with his unorthodox psychotherapist for treatment, while having a crush on his stepdaughter.

Rated R for pervasive drug use, language and some sexuality.