Without a Trace: The Complete Third Season 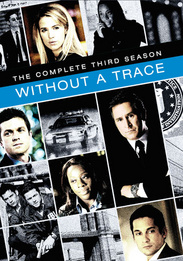 Starring Emmy and Golden Globe winner Anthony LaPaglia, Poppy Montgomery, Oscar nominee Marianne Jean-Baptiste, Enrique Murciano and Eric Close, this hit procedural drama focuses on a special New York--based FBI task force known as the Missing Persons Squad. At the start of the third season, the newly promoted Vivian has replaced Jack as the leader of the Missing Persons Squad. Jack, who is experiencing his share of marital difficulties, is not displaced for long, however, and soon resumes his post. Meanwhile, Vivian is having trouble hiding her health condition from her co-workers and Martin and Samantha's relationship reaches a defining moment. Through it all, the team strives to solve the cases they are constantly challenged by. Guest stars this season include Emmy winner Chad Lowe, Tony Goldwyn and John Krasinski, as well as Timothy Busfield and Martin Landau, in recurring roles.