The Boy in Striped Pajamas 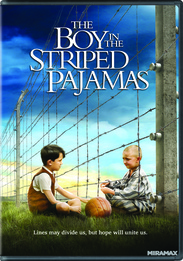 This emotionally evocative and thought-provoking film depicts the beautiful power of friendship that forms between two young boys during World War II. Based on the best selling novel, this is a timeless story of innocence lost and humanity found.

Rated PG-13 for some mature thematic material involving the Holocaust.