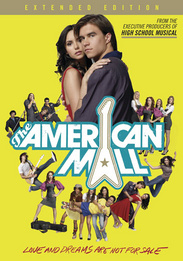 From the executive producers of High School Musical, The American Mall is about Ally, a hardworking young woman whose mom owns a music shops thats the soul of the mall. Allys singer/songwriter ambitions start to blossom when she meets Joey, a musician moonlighting as a janitor at the mall to support his own rock star dreams. While Joey understands her songs (and heart) like no one else, Allys happiness and the fate of the store are threatened when the mall owners spoiled, driven daughter Madison gets involved. Its high drama that rocks full on through song and dance. And at The American Mall you can fall in love, live your dreams and have the time of your life.