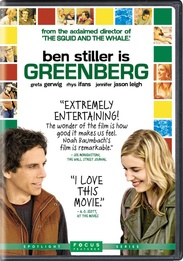 Roger Greenberg (Ben Stiller) is single, fortyish and deliberately doing nothing. In search of a place to restart his life, he agrees to housesit for his brother in LA and tries to reconnect with his former bandmate (Rhys Ifans) and successful ex-girlfriend (Jennifer Jason Leigh). But old friends aren't necessarily still best friends, and Greenberg soon finds himself forging a connection with his brother's personal assistant, Florence (Greta Gerwig). Despite his best attempts not to be drawn in, Greenberg comes to realize that he may at last have found a reason to be happy.

Rated R for some strong sexuality, drug use, and language.