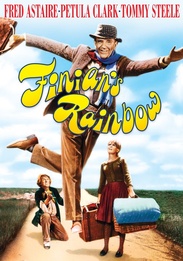 He wears a ratty old cardigan instead of tails, a battered felt hat in place of a topper -- but one glimpse of those agile feet and you know he's Fred Astaire. The great entertainer sang and danced his last musical lead in Finian's Rainbow, director Francis Ford Coppola's exuberant movie of the 1947 Broadway hit. Astaire plays an Irish rogue who plants a stolen crock of leprechaun gold in the soil near Fort Knox to reap what he thinks will be a rich harvest. In tow are his spirited daughter (Petula Clark), a love-struck leprechaun (Tommy Steele) and a bigoted Southern senator (Keenan Wynn) transformed by misbegotten magic. The treasurable Burton Lane/E.Y. Harburg score includes "How Are Things in Glocca Morra?," "Look to the Rainbow," "If This Isn't Love" and "Old Devil Moon." Watching it, you'll be in clover. Four-leaf all the way.