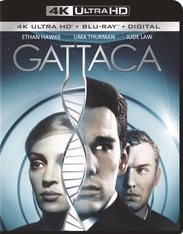 Ethan Hawke, Uma Thurman, Alan Arkin and Jude Law star in this engrossing sci-fi thriller about an all-too-human man who dares to defy a system obsessed with genetic perfection. Hawke stars as Vincent, an "In-Valid" who assumes the identity of a member of the genetic elite to pursue his goal of traveling into space with the Gattaca Aerospace Corporation. However, a week before his mission, a murder marks Vincent as a suspect. With a relentless investigator in pursuit and the colleague he has fallen in love with beginning to suspect his deception, Vincent's dreams steadily unravel.UHD synopsisAs one of the last natural beings born into a genetically engineered world, Vincent Freeman (Ethan Hawke) has none of the pre-ordered DNA that will guarantee him success. Desperate to realize his dream of exploring space, Vincent assumes the identity of a genetically superior athlete (Jude Law). Avoiding detection using the athletes genetic markers, Vincent becomes a rising star at Gattaca Aerospace, attracting the attention of a stunning co-worker (Uma Thurman). But when a flight director is brutally murdered, a clue left at the crime scene threatens to shatter Vincents plans in this riveting sci-fi classic.

Rated PG-13 for brief violent images, language, and some sexuality.