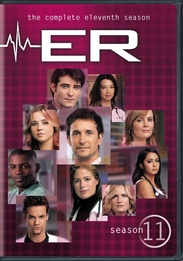 An aquarium worker with a live shark latched onto him... a blind woman and her guide companion (a miniature horse!)... a college boy with an arrow in his gut (his fraternity brothers were aiming for the apple on his head). Gunshot victims. Homeless children. Cardiac cases. So many patients, so little time.

Year 11 of the fast-paced series brings challenges and changes to the ER. Corday and Chen weigh work and family. Abby finds that being a good doctor is as tough as being a good nurse. Ray Barnett - doctor by day, rock star by night - arrives. Carter decides to leave. He's been there from the start, a student turned leader who picked up where Greene left off. He set the tone, provided the example. His impact will endure.