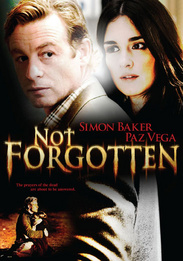 Simon Baker of THE MENTALIST stars as Jack Bishop, a picture-perfect husband and father in a peaceful Texas border town. But when his 11-year-old daughter is kidnapped, he'll hunt her abductors -- and unleash his own tortured soul -- into a Mexican hell of barrios and bordellos controlled by the mysterious religion of La Santa Muerte. When a man has too much to hide and nothing to lose, should he dare to search for the truth? Paz Vega (SPANGLISH), Benito Martinez (THE SHIELD) and Claire Forlani (CSI: NY) co-star in this shocking thriller where not everyone is who they seem to be and the darkest secrets of the past are NOT FORGOTTEN.