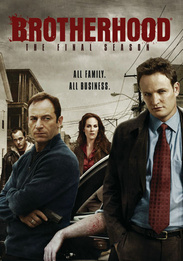 A working-class Irish family is torn between right and wrong when two brothers live out their destinies on opposite side of the law. BROTHERHOOD tells the story of two brothers who sometimes share a twisted sense of moral compromise - each with his own skewed, idealistic vision of what makes the American dream.