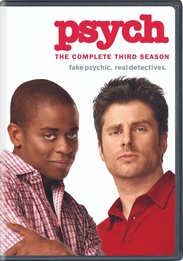 Fake psychic detective Shawn Spencer (James Roday) and his best friend Gus (Dulé Hill) are cracking the case  and cracking up audiences everywhere  in all 16 Season Three episodes from the quick-witted detective series Psych. After earning a reputation for taking on the unusual cases that leave most sleuths scratching their heads, Shawn and Gus are in for more mayhem this season as they tackle mysteries that range from the decidedly abnormal to the hauntingly paranormal. Join guest stars Cybill Shepherd (The L Word), Gary Cole (Pineapple Express), Phylicia Rashad (A Raisin in the Sun) and many more in this fresh and funny show that Maureen Ryan of Chicago Tribune declares, Roday and Hill have the kind of chemistry you just can't manufacture.