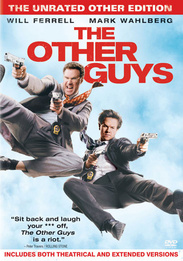 Misfit NYPD detectives Gamble and Hoitz (Will Ferrell & Mark Wahlberg) are sentenced to life behind the desk. They hate each other and the monotony of their meaningless jobs, as they're forced to live in the shadow of the two biggest and most bad ass cops on the force (Samuel L. Jackson & Dwayne Johnson). But when those guys go down for the count, opportunity knocks for Gamble and Hoitz. Stumbling onto what could be one of the biggest crimes in years, can The Other Guys step up their game to solve the case without killing each other and destroying NYC in the process?

Rated PG-13 for crude and sexual content, language, violence and some drug material.