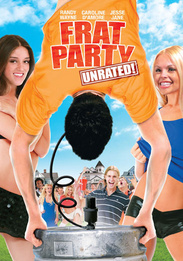 Duffy (Randy Wayne), the former campus king of one-night stands, kinky threesomes, and wild Gamma House parties, has fallen in love with super-hot Adriana (Caroline D'Amore of SORORITY ROW), who trusts him so much that she's allowing him to throw a final blowout on the night before their wedding. But before Duffy can make it to the altar, he'll have to survive one last Banga Gamma bash full of Asian masseuses, horny ex-girlfriends, strip beer-pong, S&M booby traps, the temptations of adult film superstar Jesse Jane, and the rich jerk determined to steal his fiancÃ© away. It's an unrated, uncensored, unstoppable comedy about true love, raging nudity, and all kinds of happy endings.

Rated R for strong crude and sexual content, nudity and language throughout.