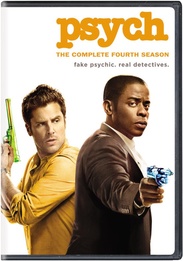 Smart. Scientific. Psychic? The decidedly distinctive team of Shawn Spencer (James Roday) and Burton Guster (Dulé Hill) from Psych P.I. are back for more laughs, more mystery, and more highly unusual cases in every wildly entertaining episode of Season Four. They might disagree, but they can always depend on each other. In this captivating season of whimsical and wonderful whodunits, their friendship and their business will be put to the test by a slew of potential culprits that include werewolves, ghosts, a shark, and those they trust the most. Guest-starring Sendhil Ramamurthy (Heroes), James Brolin (Catch Me If You Can), Rachael Leigh Cook (Shes All That) and Ally Sheedy (The Breakfast Club), Psych continues to captivate viewers with the quirkiest detective duo to ever take on a case.