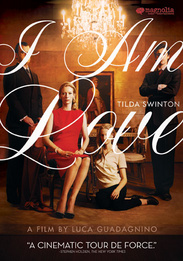 The story of the wealthy Recchi family, whose lives are undergoing sweeping changes. Eduardo Sr., the family patriarch, has decided to name a successor to the reins of his massive industrial company, surprising everyone by splitting power between his son Tancredi, and grandson Edo. But Edo dreams of opening a restaurant with his friend Antonio, a handsome and talented chef. At the heart of the family is Tancredi's wife Emma (Tilda Swinton), a Russian immigrant who has adopted the culture of Milan. An adoring and attentive mother, her existence is shocked to the core when she falls quickly and deeply in love with Edo's friend and partner Antonio, and embarks on a passionate love affair that will change her family forever.

Rated R for sexuality and nudity.