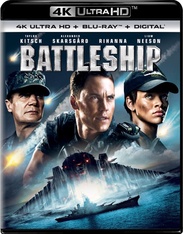 Peter Berg (Hancock) produces and directs Battleship, an epic-scaled action-adventure that unfolds across the seas, in the skies and over land as our planet fights for survival against a superior force. The battle for Earth begins at sea in this epic action-adventure starring Liam Neeson, Taylor Kitsch, Rihanna, Alexander SkarsgÃ¥rd and Brooklyn Decker.

Rated PG-13 for intense sequences of violence, action and destruction, and for language..