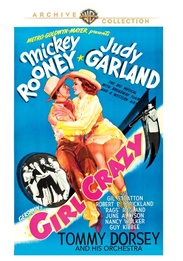 Mickey Rooney. Judy Garland. Gershwin music. And Tommy Dorsey to play it. Who could ask for anything more? From Garland's rendition of "But Not for Me" to the grand finale of "I Got Rhythm," Girl Crazy is one of the most buoyant tunefests ever put on screen. Rich kid Danny Churchill (Rooney) has a taste for wine, women and song, but not for higher education. So his father ships him to an all-male college out West where there's not supposed to be a female for miles. But before Danny arrives, he spies a pair of legs extending out from under a stalled roadster. They belong to the dean's gtanddaughter Ginger Gray (Garland), who is more interested in keeping the financially strapped college open than falling for Danny's romantic line. At least at first.