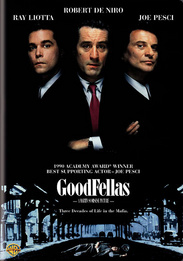 The gangster film for modern day is based on the true story of Henry Hill, played by Liotta, who dreamed as a kid of becoming a member of the glamorous mob who ran his New York neighborhood. DeNiro and Pesci are members of the family he ascends to, until he breaks the code and eventually falls from grace.