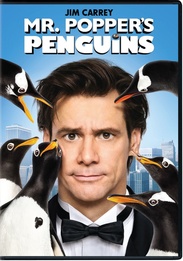 An adaptation of the beloved 1938 children's book, about Mr. Popper, a house painter whose dreams of Arctic exploration prompt him to write letters to real explorers. One of them sends him a penguin, which he keeps in the icebox. Before he knows it, the painter has a litter of 12 beaked birds. They eat voraciously, leading him to form Popper's Performing Penguins, a stage act that goes on tour and creates mayhem at every stop.

Rated PG for mild rude humor and some language.