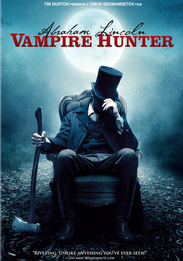 Abraham Lincoln: Vampire Hunter explores the secret life of our greatest president, and the untold story that shaped our nation. Visionary filmmakers Tim Burton and Timur Bekmambetov (director of Wanted) bring a fresh and visceral voice to the bloodthirsty lore of the vampire, imagining lincoln as history's greatest hunter of the undead.

Rated R for violence throughout and brief sexuality.