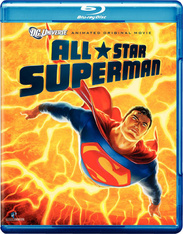 Fueled by hatred and jealousy, Lex Luthor masterminds an elaborate plot to kill the Man of Steel  and it works. Poisoned by solar radiation, Superman is dying. With weeks to live, he fulfills his life's dreams  especially revealing his true identity to Lois Lane  until Luthor proclaims his ultimate plan to control the world with no alien hero to stop him. Powers fading, Superman engages in a spectacular deadly battle with Luthor that could truly trigger the end of Earth's Greatest Protector. This startling and gripping DC Universe Animated Original Movie stars the voice talents of James Denton, Anthony LaPaglia, Christina Hendricks and Ed Asner.

Rated PG for sequences of action and violence, language including brief innuendo, and some sensuality.