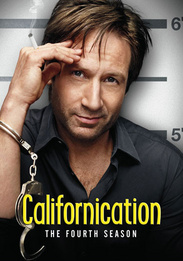 The Showtime Original Series Californication ended season three with bad-boy novelist Hank Moody being hauled off to jail for assaulting the boyfriend of his troublemaking, underage, former fling Mia. His home life with Karen and Becca is in ruins, but the scandal surrounding the publication of his latest book has turned him into a hot Hollywood commodity â in more ways than one. Can Hank navigate the mess heâs made of his life and come out on top? Donât miss the all-new season four!