Guns Of The Timberland 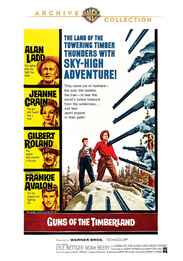 Jim Hadley has a government grant to cut timber near the high-country town of Deep Well, and that's what he and his callous lumbermen insist they'll do. But the townspeople, knowing the ruinous watershed destruction that follows such clear-cutting, resist Hadley setting in motion a clash of wills and force. The quiet authority that marks the Western performances of Alan Ladd (Shane) is on display in this tale based on a novel by renowned cowboy chronicler Louis L'Amour. Ladd portrays Hadley, whose resolve and heart are tested by a buckskin-jacketed rancher (]eanne Crain of Pinky and A Letter to Three Wives) who helps lead the struggle to protect Deep Well. Gilbert Roland and teen heartthrob Frankie Avalon round out the top-billed cast, and Aaron Spelling - on his way to becoming a giant of TV production with an imposing career that would last into the mid-2000s produces and coscripts the Technicolor movie.