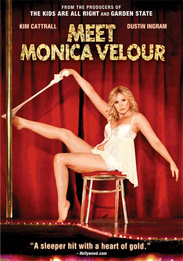 In this irreverent comedy, awkward teenager Tobe (Dustin Ingram) sets off on a road trip to meet Monica Velour (Kim Cattrall), his favorite '80s porn star, at a rare live appearance hundreds of miles away. Instead of the glamorous sexpot portrayed on film, he finds a 49-year-old single mom living in a trailer in rural Indiana, performing at seedy strip clubs to make ends meet. A starry-eyed Tobe, still captivated by his crush, befriends Monica, further complicating her difficult life. Kim Cattrall gives a career-defining performance in this offbeat love story that appeals to the dreamer -- and the nerd -- in all of us.

Rated R for strong sexual content, nudity, language and some drug use.