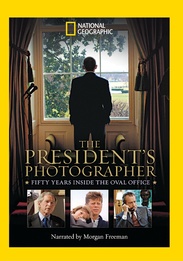 Pete Souza is never far behind President Obama. In fact, sometimes hes ahead of him. As Obamas chief White House photographer, Souza is Obamas shadow. With unprecedented access, National Geographic follows Souza inside the Obama White House, aboard Air Force One, backstage at the State of the Union, and into the heart of the West Wing. Also featuring previous presidents and their official photographers, this revealing progra, spans half a century inside the Oval Office. Its a behind-the-scenes look at the everyday grit of the American Presidency, and a chance to see what its like to cover the most powerful man in the world.