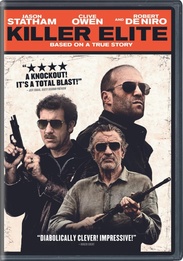 Inspired by true events, KILLER ELITE is an action-adventure spy film that follows Danny (Jason Statham), one of the world's most skilled special-ops agents. Lured out of self-imposed exile, Danny reassembles his crack team of operatives to execute a near-impossible mission of retribution - to rescue his former mentor and partner Hunter (Robert De Niro). Together they must penetrate the highly feared and respected military unit, the British Special Air Service (SAS), to take down a rogue cell of soldier assassins and their leader Spike (Clive Owen) before their actions create a global crisis.

KILLER ELITE'S whirlwind journey of action hurtles across the globe: from Mexico to Australia, from Paris and London to Oman and Wales. The film is based on Ranulph Fiennes' controversial non-fiction bestseller "The Feather Men."

Rated R for strong violence, language and some sexuality/nudity.