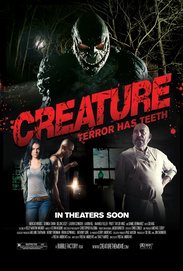 An ex-Navy seal, Niles (Mehcad Brooks, True Blood), his girlfriend Emily (Serinda Swan, Tron) and their friends head out on a road trip to New Orleans. When the group decides to stop at a roadside convenience store owned by Chopper (Sid Haig, Devils Rejects) they are introduced to the legend of Lockjaw, a Creature who is part man, part alligatorâ¦The Legend has it that an inbred local man by the name of Grimley (Daniel Bernhardt, The Matrix: Reloaded), lost his family to a monstrous white alligator, and because of the devastating loss of his family was driven to madness and was transformed into the Creature. Their curiosity peaked, the group decides to head deeper into the swamps to check out the birthplace of this Creature legend. As they journey further into the backwoods the group arrives at an old dilapidated cabin and decide to camp there for the night and inadvertently unleash the Creature who terrorizes the group.