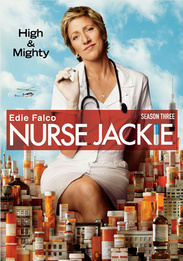 Still high and mighty! The Showtime® hit series "Nurse Jackie" ended season two with the ugly truth closing in on super-nurse Jackie Peyton. Jackie's best friend and husband put the pieces together about her pill-popping ways and confronted her about her addiction. But if the people in her life think one little intervention is going to stop her, they don't know Jackie. The great white liar returns for another hilarious season of 12 episodes on 3 discs.