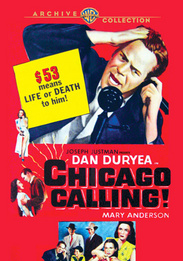 Bill Cannon (Dan Duryea) loses everything to alcohol: his job, his family, his self-respect. Soon after his wife and daughter leave him, he receives word his little girl has been injured in a car accident outside Chicago. His wife will call later with news, but Billâs short the $53 he needs to keep his phone from being disconnected. Filled with anguish, he heads out onto the Los Angeles streets to find some way to come up with the cash. As his character encounters expected cruelty and unexpected kindness, Duryea takes what might have been mere melodrama and turns it into a perceptive examination of one shattered soul. The other fine star of this race-against-the-clock programmer is an unglamorous, lunch-bucket L.A. rarely captured on film.