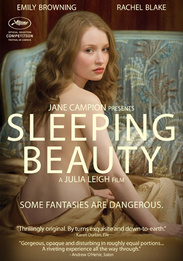 SLEEPING BEAUTY, is a fascinating depiction of a young womanâs reckless decent into a shocking world of erotic desires. Lucy (Emily Browning) is a young university student possessed by a kind of radical passivity. She lets a flip of a coin decide the outcome of a random sexual encounter and she displays an uncomplaining patience when facing the repetitions of her various menial jobs that fund her studies. One day she answers an ad in the student newspaper and interviews for a job to be a lingerie waitress. But she is secretly being initiated into a world of strange new work; one where she will have to give into absolute submission to her clients by being sedated; becoming a Sleeping Beauty. Eventually this unnerving experience begins to bleed into her daily life and she finally develops the will to break the spell by discovering what happens to her while she sleeps. With a fearless performance by Browning, Leigh creates a bold cinematic vision; one where Lucy, both in her clandestine sexual adventures and in her mundane daily existence, lives with the same unflinching and brutal honesty.