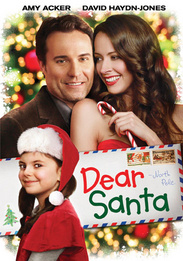 Shopaholic Crystal's (Amy Acker, Alias) wealthy parents give her an ultimatum: change her irresponsible ways by Christmas or they will cut her off without a cent. With no job or romantic prospects, what's a party girl to do? Fate intervenes when she finds seven year-old Olivia's (Emma Duke) letter to Santa asking for a new wife for her widowed dad Derek (David Haydn-Jones). Crystal tracks them down and vows to win over father and daughter before the fast-approaching holiday deadline. Volunteering at Derek's struggling soup kitchen, Crystal is at first a fish out of water, but she is determined to prove to him and herself that there's more to her than just shopping and lattes. Only Derek's jealous and calculating girlfriend (Gina Holden, Harper's Island) stands between her and her newfound happiness. Share the gift of love and laughter with this heartwarming romantic comedy directed by Jason Priestley (Beverly Hills 90210).