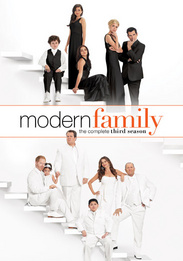 Join TVâs #1 family for another hilarious and refreshingly original season of Modern Family, winner of eleven EmmyÂ® Awards, including Outstanding Comedy Series two years in a row! As the extended Pritchett/Dunphy clan faces an uproariously unpredictable array of family vacations, holiday hassles, troublesome in-laws, and surprising secrets, they still somehow manage to thrive together as one big, loving family â even as they drive each other absolutely insane! Season Three features a hilarious gag reel and never-before-seen couch confessions that will make you laugh out loud and remind you why viewers and critics alike have fallen in love with this thoroughly Modern Family.