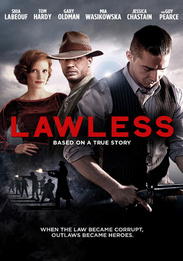 LAWLESS is the true story of the infamous Bondurant Brothers: bootlegging siblings who made a run for the American Dream in Prohibition-era Virginia. In this epic gangster tale, inspired by true-life tales of author Matt Bondurantâs family in his novel âThe Wettest County In The Worldâ, the loyalty of three brothers is put to the test against the backdrop of the nationâs most notorious crime wave.

Rated R for strong bloody violence, language and some sexuality/nudity.