Apostle Peter and the Last Supper 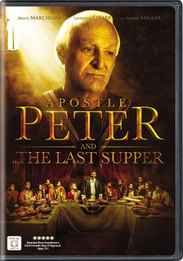 Awarded the Dove Foundations "Family Seal of Approval" and recommended for ages Twelve and above, Apostle Peter And The Last Supper is a must see family Faith-based biblical story of hope, forgiveness, prayer and the message that anything is possible. Relive the time Peter spent with Jesus, from the Great Commission to the life-changing Last Supper and the garden of Gethsemane. Set in Rome. AD 67. Two Jailers at the ancient Mamertine Prison take custody of a famous criminal. He is Simon Peter of Galilee-apostle, disciple, and the personal friend of Jesus (Bruce Marchiano), also called The Christ. Condemned to death, the elderly Peter (Robert Loggia) recounts his life as a simple fisherman who became one of the boldest figures in all of Christianity. As Peter prepares to depart this earthly life, he will make an unforgettable impression on his jailers through the saving power of the Gospel.