I Kissed a Vampire 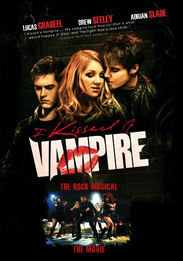 Haunted by bizarre dreams about Goth rocker Trey Sylvania (DREW SEELEY), and experiencing a growing lust for blood, Dylan (LUCAS GRABEEL), a not-so-average teenager finds himself transforming into a vampire! It all started when he was bitten by a voracious fanged exchange student, and it's a process he is desperate to stop - but how? His demented dentist can't do anything about Dylan's aching teeth and emerging fangs, and the anti-bloodsucking pills he gets from his para-psychologist just give him a rash. Dylan is terrified and he doesn't know what to do - especially about his beautiful girlfriend Sara (ADRIAN SLADE).