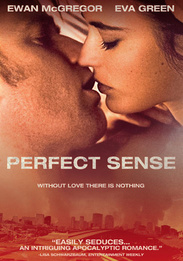 A hit at Sundance '11 and winner of the Ediburgh Film Festival's prize for Best New British Feature, the amazing genre creation directed by David Mackenzie stars Eva Green and Ewan McGregor as witnesses to the end of the world-- strangers who form a desperate romantic connection in the face of an apocalyptic epidemic of sensory loss.

Rated R for language and some sexuality/nudity.