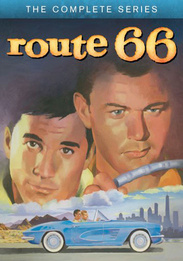 On a weekly basis, from 1960 to 1964, the CBS network treated American audiences to two things they loved the most: television drama and cars. Starring Martin Milner, George Maharis and later Glenn Corbett, this series presented the exciting adventures shared by a pair of good-natured friends as they drove their Corvette convertible across the country, traversing the often dangerous highway known as Route 66.