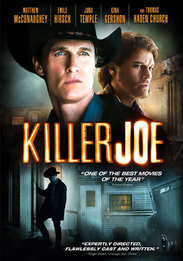 When 22-year-old drug dealer Chris (Emile Hirsch) has his stash stolen by his mother, he has to come up with six thousand dollars quick or he's dead. Desperate, he turns to "Killer Joe" (Matthew McConaughey) when he finds out that his mother's life insurance policy is worth $50,000. Although Joe usually demands cash up front, he finds himself willing to bend the rules in exchange for Chris' attractive younger sister, Dottie (Juno Temple), who will serve as sexual collateral until the money comes in... if it ever does.

Rated R for strong and disturbing violence, sexuality, graphic nudity, drug use and language. Previously rated NC-17 for graphic aberrant content involving violence and sexuality, and a scene of brutality.