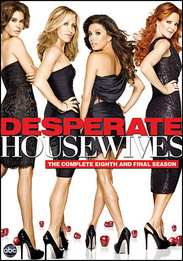 It's the final climactic season of the iconic series that redefined life in the suburbs -- ABC's DESPERATE HOUSEWIVES! The stakes are higher than ever as the world's most celebrated housewives are united by their involvement in the murder of Gaby's loathsome stepfather. And the desperation mounts when Bree receives an anonymous "I know what you did" message worded identically to Mary Alice's fateful note. Meanwhile, Renee tries to spark up some romance with hot new Aussie neighbor Ben, Lynette and Tom navigate the rough waters of their separation and Susan jumps headfirst into a "relationship" with a volatile art professor who is determined to draw out her wilder side. Mysteries will be solved, relationships are tested and the excitement is at an all-time high. Kiss the ladies of Wisteria Lane goodbye and complete your collection with this thrilling 6-disc set, featuring all 23 wickedly entertaining episodes and exclusive, never-before-seen bonus features!