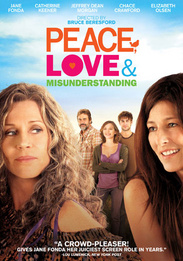 For uptight Manhattan lawyer Diane, crazy means driving her teenage son Jake and adult daughter Zoe to visit their grandmother Grace. The crazy part is that the kids have never met Grace. In fact, Diane hasn't spoken to her mother in twenty years. Grace is the epitome of the term "hippie": she stages protests and hootenannies in the town square, smokes (and sells) a lot of dope, and howls at the moon once a month with her goddess-worshipping girlfriends. But what's meant to be a weekend getaway turns into a summer adventure of romance, music, family secrets, and self-discovery.

Rated R for drug content and some sexual references.