Don't Trust the B---- in Apartment 23: The Complete Series 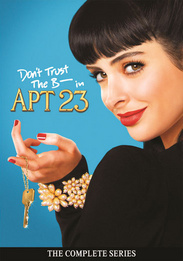 When naive Midwesterner June (Dreama Walker) moves to New York City, she finds her corporate job has disappeared and her roommate Chloe (Krysten Ritter) is an amoral party-girl. June's life-view is put to the test as she struggles to adapt to Chloe and her colorful cast of friends including James Van Der Beek, hilariously playing himself. The two roommates eventually form a friendship that leads them both to unexpected places. This complete series proves why Don't Trust the B in Apt. 23 has earned the reputation of being one of the most original and edgiest comedies on television.