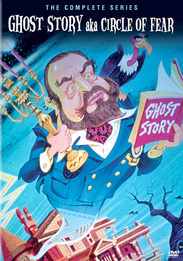 Horror movie maestro William Castle (The Tingler) followed his role model Alfred Hitchcock into TV with this anthology series of suspense and shudders, though he ceded the hosting chores to Sebastian Cabot (TVâs âFamily Affairâ) as âWinston Essexâ for the first part of the series. A mid- season name change (to âCircle of Fearâ) and a no-host format were intended to boost ratings, but this quirky, chilling and fascinating series only lasted one season. All 23 hour-long episodes are included.