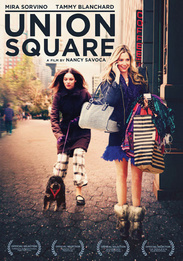 New York Cityâs UNION SQUARE is the setting for an unexpected reunion between two estranged sisters, one of whom is on the verge of getting married, the other on the verge of a nervous breakdown. Lucy (Academy AwardÂ® winner Mira Sorvino) attempts to shop for young and flirty discount clothes while anxiously carrying on a conversation on her cell phone. When the news on the other end of the cell is not what she wants to hear, she has a complete meltdown in the park. Crying openly and unsure of her next move, she has an idea. Suddenly, Lucy finds herself somewhere sheâs never been: her sister Jenny's (Tammy Blanchard) loft apartment off Union Square.

The apartment is as spare and disciplined as Jenny is herself. Jenny is stunned to see Lucy on her doorstep and, whatâs worse, unable to keep her out â Lucy has decided she needs to stay with Jenny a few days, along with her dog and all her shopping. Attempting to remain calm, Jenny has little time to prepare how to explain Lucyâs presence to her fianceÌ Bill (Mike Doyle), whom she has not been completely honest with about her familyâs tumultuous upbringing in the Bronx or her sisterâs excessive behavior. Lucy suspects as much and attempts to play along but also tries to update Jenny about their mother (Patti LuPone) and the old neighborhood. And the news is not what Jenny expects to hear. After a tense dinner with Bill, the sisters try to clear the air by heading out together to a club, but the confrontation that follows only creates more tension. And the next day when Lucy leaves as unexpectedly as she showed up, Jenny is left wondering what else could possibly happen to disrupt her ordered life...that is, until Lucy returns with even more surprises for Jenny.